I released a new crate that I wanted to share: 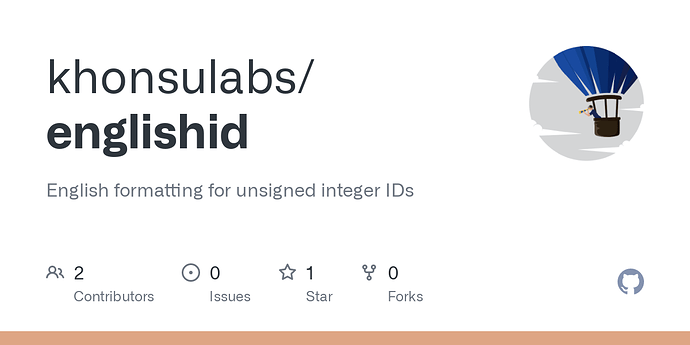 English formatting for unsigned integer IDs. Contribute to khonsulabs/englishid development by creating an account on GitHub.

We have two problems that we’re trying to solve, and this crate will help us with both of them:

Enter: englishid. I’m sure just as the “gif” creator has to live with people mispronouncing their library’s name, mine would also fall victim to such a mistake that I will just leave the naming inspiration here: It’s common for us crazy Americans to turn a noun into a verb. E.g., “Let me google that for you.”

My attempt at punny humor is present in this crate’s name: “I englishedid the ID for you.” … I tried. Feel free to just call it “English ID” instead of “Englished”.

What does it do?

englishid offers two sets of APIs that convert data into a series of English words. The list of words chosen is based on the EFF’s wordlist which appears to be a “safe” wordlist to use in a commercial environment. I expanded the list from 7,776 entries to 8,192 entries, allowing each word to encode 13 bits of information.

Produces 42 => accept-abacus. To decode, call englishid::parse_u16("accept-abacus")?). The astute reader will notice that two word are used to encode a u16 – that wastes 10 bits of data. What if you want to just encode 13 bits? You can restrict the word limit during encoding:

Produces 42 => accept. The same decode function is used to decode the id. The crate offers APIs for each of the unsigned primitives in Rust.

The last set of APIs allow encoding arbitrary data. Since 13 is not a nice power-of-two multiple, to successfully decode a payload we must know the original length of the payload. My first stab at writing usable APIs uses three pairs of methods:

The crate is fairly well tested, and the algorithms aren’t very tricky, so I feel fairly confident that the encoding format itself can stay stable. However, additional eyes would be appreciated. As my confidence grows, I will release a 1.0 version.

Another area of feedback I would appreciate is on the contents of the wordlist itself. I found, for example, “aids” and “aide”. As I was adding words, I removed both words. Why? If I was a friend helping you recover your account by reading the words to you as you typed, and I said, “aid,” would you know to spell it with the “e”? Similarly, “aides” is a real word as well.

Hopefully other people enjoy this crate.

A quick update from the rest of the labs

We’ve been mostly focused on working on BonsaiDb as well as the next step in our development plans. Our next devlog should cover a new development release of BonsaiDb – the first one under the new name, and the first one that includes user authentication and the ability to define custom APIs.